Our park is set in dense trees only 2 km South West of town. The park boasts a large picnic and play area making it a great place for family reunions or other gatherings. Hike the great coulees that are a part of the Big Muddy Valley. A great place for camera buffs and bird watchers. Pets are permitted in the Park when on a leash.

(All fees include taxes. Prices subject to change without notice. Seasonal sites subject to pre-determined quantity and location.)

Location:
The park is located-
2km south west of town. 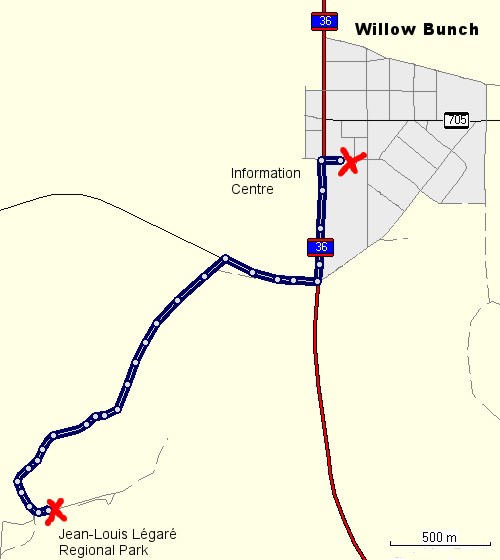 In 1961, an order of council was passed by the government estabilshing the Jean-Louis LégaréRegional Park Authority. Four local residents were instrumental in starting a collection to buy 2 quarters of land to establish a Regional Park.

Farmers and students cooperated with every effort to make this park and golf course one of the top ten in southern Saskatchewan. The golf course, with many contributed hours of labour, was estabilshed in 1965. In 1969, Sharon School was moved to its present location in the park and became the golf clubhouse. The park has come a long way since those days, now having electrified sites, modern washrooms and shower house, concession and gazebos for rent, watered fairways and grass greens, a workshop, golf cart storage sheds, and playground equipment. In 1970, Willow Bunch turned 100 years old and it was those ceremonies on July 8 and 9 that a plaque dedicated to the founder, Jean-Louis Légaré, was presented to the Mayor and was to be installed on a cairn in the park. That is where you can see that cairn to this day. The Jean-Louis Légaré Regional Park is now being known as the hidden gem in our wonderous coulees that are part of the Big Muddy. Come visit and stay a while!